What is an Islamic Bank?

Islamic banking is a term used by Muslims to describe a banking system that operates in accordance with Sharia law. This type of bank offers Sharia-compliant services, which means it doesn’t charge interest or commission, includes no gambling or other forms of speculation, and does not invest in companies that are involved in alcohol production or gambling.

This is guided by Islamic law and principles. It prohibits the receipt and payment of interest, trading in financial derivatives, and investing in companies that engage in non-compliant activities.

An Islamic bank loan is a great option for anyone who believes in the Muslim faith as it does not charge interest on loans.

Instead, they offer risk-sharing products such as profit-sharing investment accounts and Islamic bonds. These products are designed to be more flexible than the traditional fixed deposits offered by standard banks.

And it is a system of financing that is in accordance with the Islamic investment principles. The basic principle of Islamic finance is that the bank cannot provide loans for people who are not financially stable enough to repay them on time. 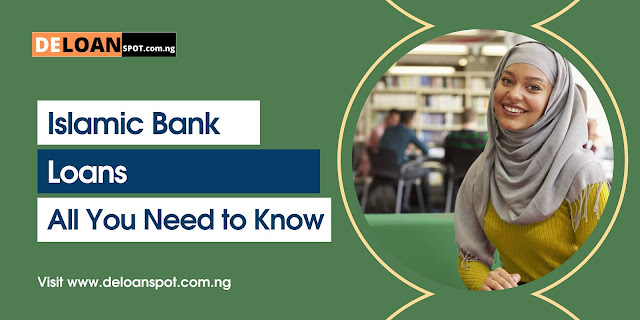 How do Islamic bank works?

An Islamic loan is a type of product offered by lenders to help customers who want to borrow money without breaking Islamic law.

With Islamic loans, the customer is not paying interest. Instead, they are paying an additional sum that will go to charity or non-profit organizations.

In Nigeria, as in many other countries, Islamic banks are on the rise. This is due to the fact that more and more people are becoming Muslim and therefore need a bank that matches their values. Islamic banks have many restrictions compared to regular banks which makes it harder for them to compete with conventional banks. They cannot offer unsecured loans or investments, but they can provide credit facilities to their borrowers.

Most Islamic bank loan borrowers in Nigeria are Nigerian Muslims who use these kinds of loans for business ventures. There is also an increasing amount of non-Muslim Nigerians who want this type of banking option because they do not want to take part in any banking that would be considered sinful according to their doctrine.

And like we said before an Islamic bank loan is a type of Sharia (law)- that is available only to Muslim borrowers and investors which follows Islamic principles and prohibits any interest or other charges that are not permissible by Islamic law (Sharia).

– Sharia’h Compliant Loan: this type of loan is interest-free and is designed to avoid the payment of Riba (i.e to charge interest), which is prohibited in Islam.

– Ijara: a leasing agreement that is based on payments by instalments.

– Murabaha: it is an Islamic contract used for both purchase and sale, but there must be a difference between the purchase price and the sale price. This type of contract does not include interest but instead has a predetermined profit margin agreed by both parties beforehand.

What is the Islamic Investment Principle

Islamic investment principles are based on the Islamic faith which is why they have different features than regular loans.

And these are three main principles of Islam that affect all types of investment: what is halal (permitted), haram (prohibited) and makrooh (disapproved).

The list of Islamic banks in the world is diverse with countries such as Kuwait, Malaysia, and Qatar. The United Arab Emirates is also included in this list of Islamic banks. According to the article “10 Best Islamic Banks 2017: Kuala Lumpur Islamic Bank, Al Rajhi Bank of Kingdom of Saudi Arabia, and More” by Business Insider (2017), Islamic banking has been growing in popularity and the number of Muslims turning to this banking option has risen.

Elite Group was founded in 1979 and they provide financial solutions for wealthy individuals, families, and institutional investors from all over the world. In 2005 they were listed on NASDAQ as a publicly-traded company which opened up their services to a wider audience. They have been operating on a global scale since 1993.

Jaiz Bank PLC-Nigeria’s premier is a non-interest bank that started operations on January 6, 2012, based on trust, professionalism and excellence, providing innovative financial solutions and an excellent customer experience.

Kuwait Finance House (K.S.C.) was established in 1977 and was the first bank to operate in accordance with Sharia law. (KFH) has become one of the world’s leading Islamic banks, in fact, they are number 3 among all the Islamic banking in the world with Assets $ million of 58.515, and has a Net income of $ million of 6.236. KFH has branches in Bahrain, Turkey, Jordan, Saudi Arabia, Malaysia and the United Arab Emirates, Oman and Bangladesh.

Qatar Islamic Bank they are the first Islamic bank that established and start operating in Qatar in the year 1982 and it is still the largest today in Qatar and also ranked number five (5) among the largest Islamic banks in the whole world by Money Gate in their article written on December 28, 2020.

If you have any questions, you can drop them in the comment section. Thank you for reading and don’t forget to share

One thought on “Islamic Bank Loan”